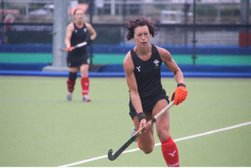 Jenny Wright to play for the Welsh Over 40 Squad.

Jenny Wright, of Carlisle Hockey Club, has been selected for the Over 40s playing squad, representing Wales, in this year’s World Cup campaign.

Having attended three sets of highly competitive trials in Cardiff, with a round trip of 600 miles each time, Jenny was initially selected for the Welsh national squad last year. She made her international debut in June, competing in the Home Nations tournament and playing against England, Ireland and Scotland.

After a successful tournament, Jenny secured her spot in the squad for the World Cup, being held in Nottingham from August 12th – 22nd. The tournament will see her play against the likes of Argentina, Chile, Spain and France.

We wish Jenny the best of luck at the tournament and congratulate her on this amazing achievement!